in the herb garden 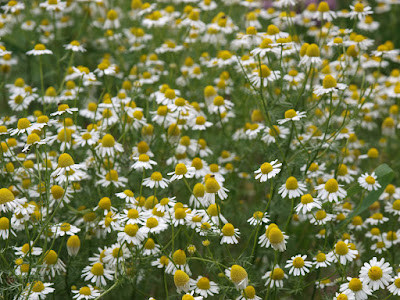 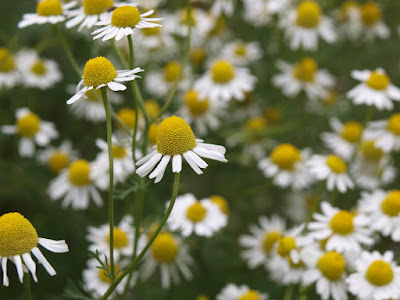 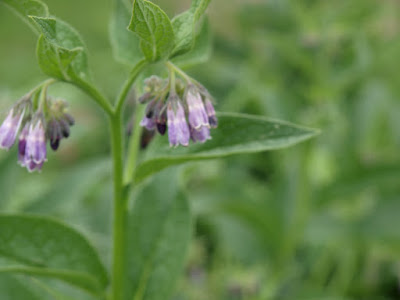 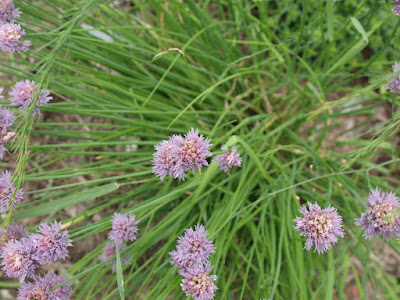 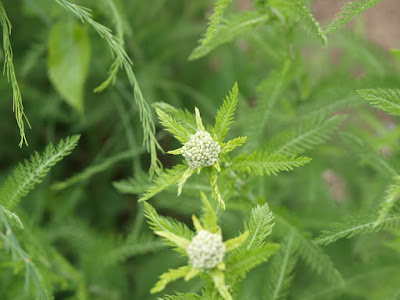 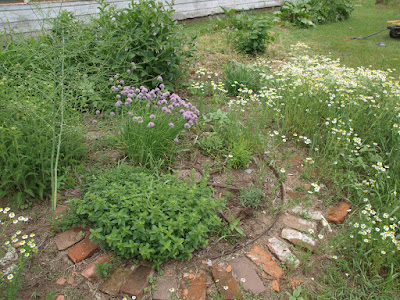 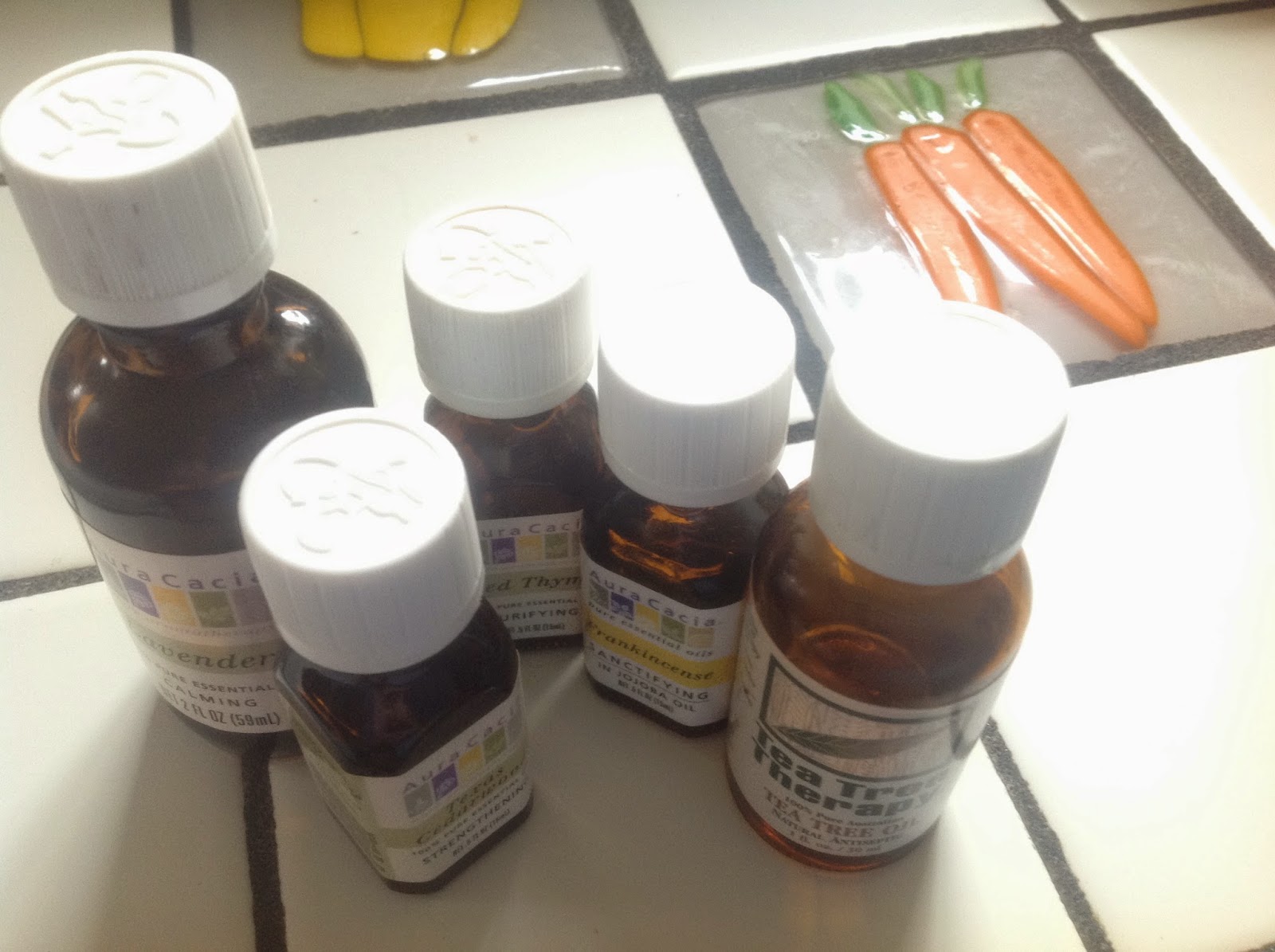 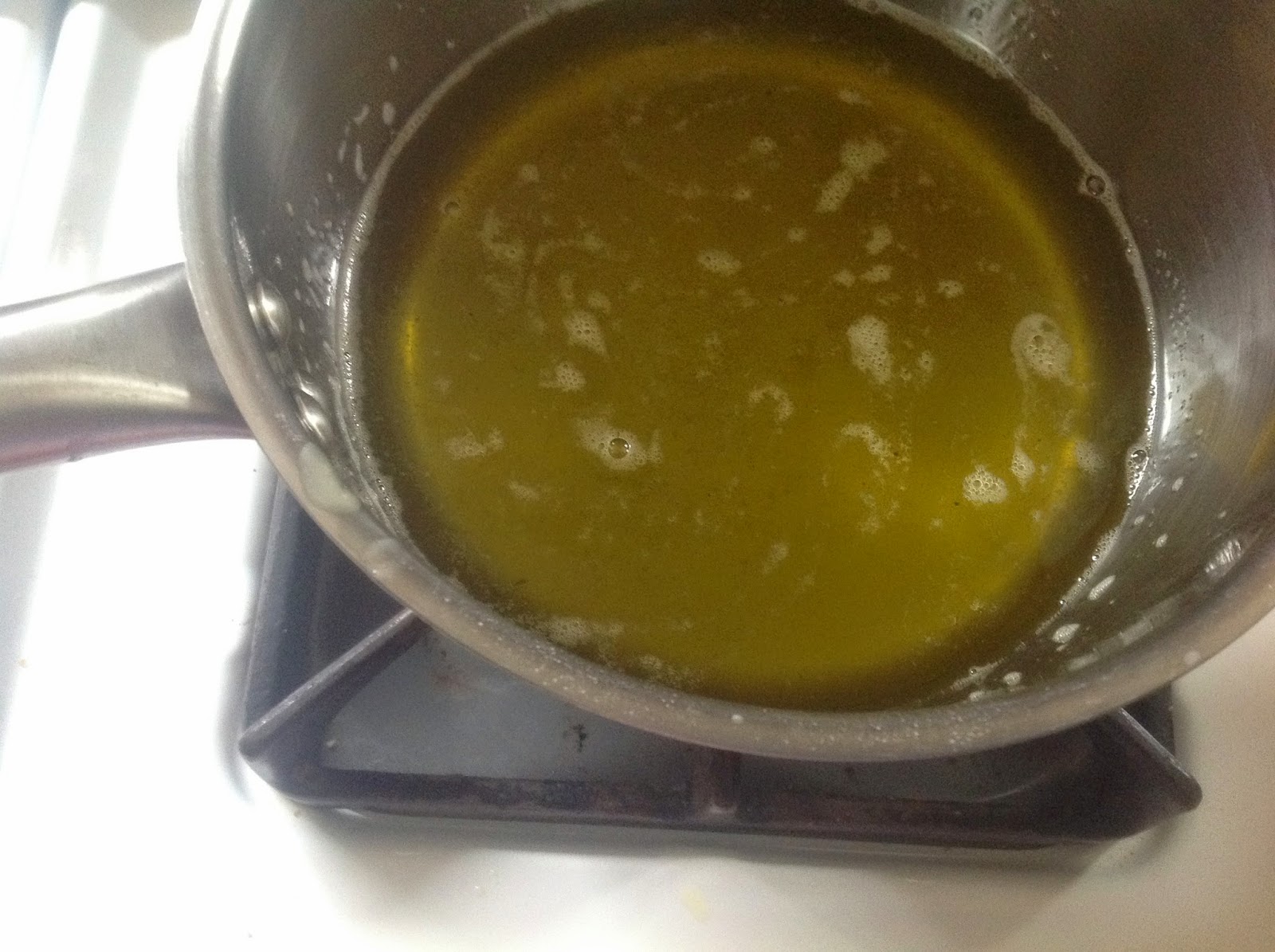 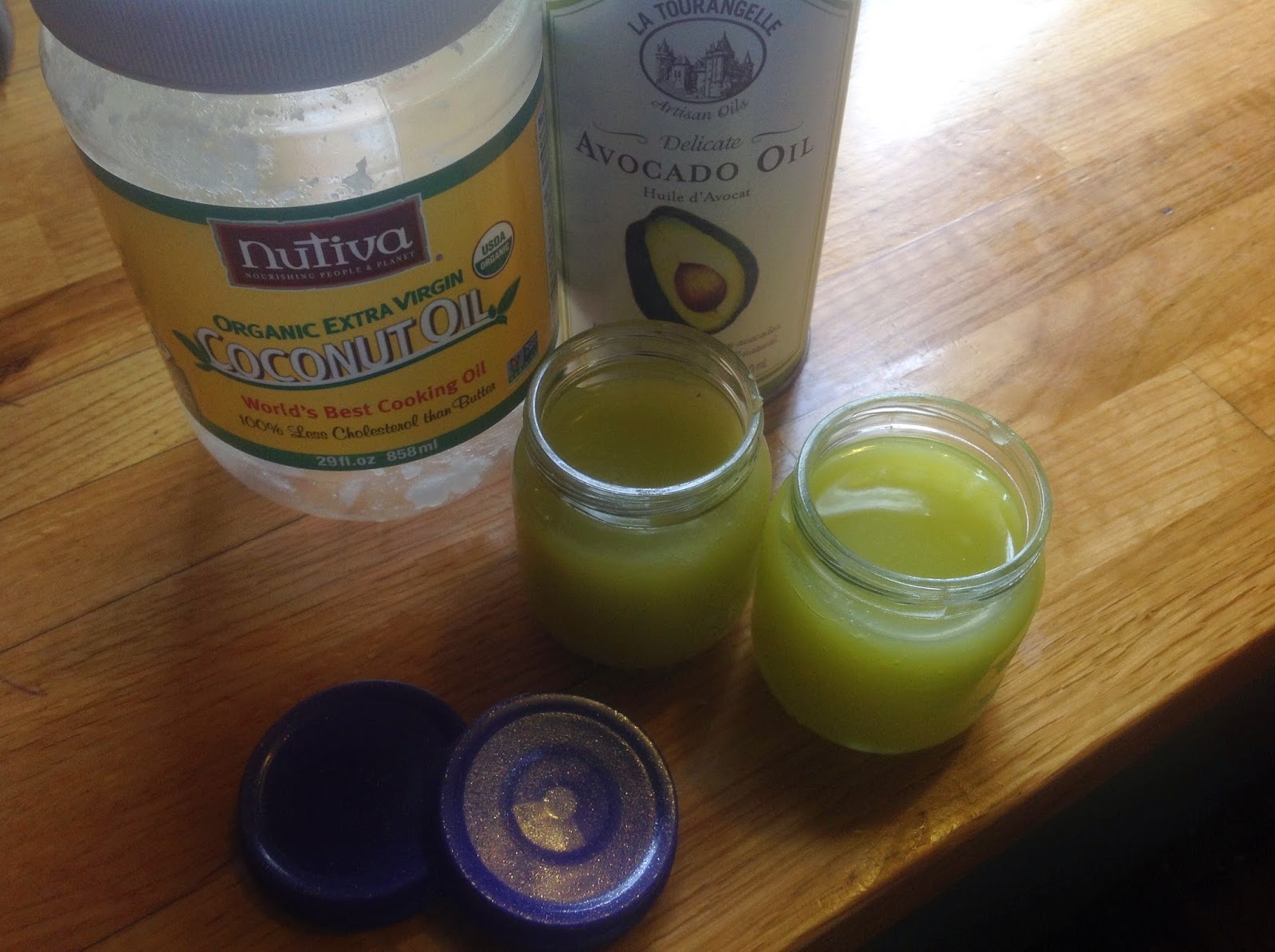 Two of my boys have dry skin and eczema in the winter months.
I usually make a salve with herb infused olive oil and neem oil.
While looking up different salves, I came across this one and decided to give it a try (I ended up increasing the beeswax amount to a 1/4 cup grated beeswax).
I usually use essential oils in small amounts to hide the smell of neem, not as medicine themselves.
But this salve seems to be working great already!  So, today I cleaned out some babyfood jars that someone gave us and painted the lids, and fill them with this salve for family and friends. 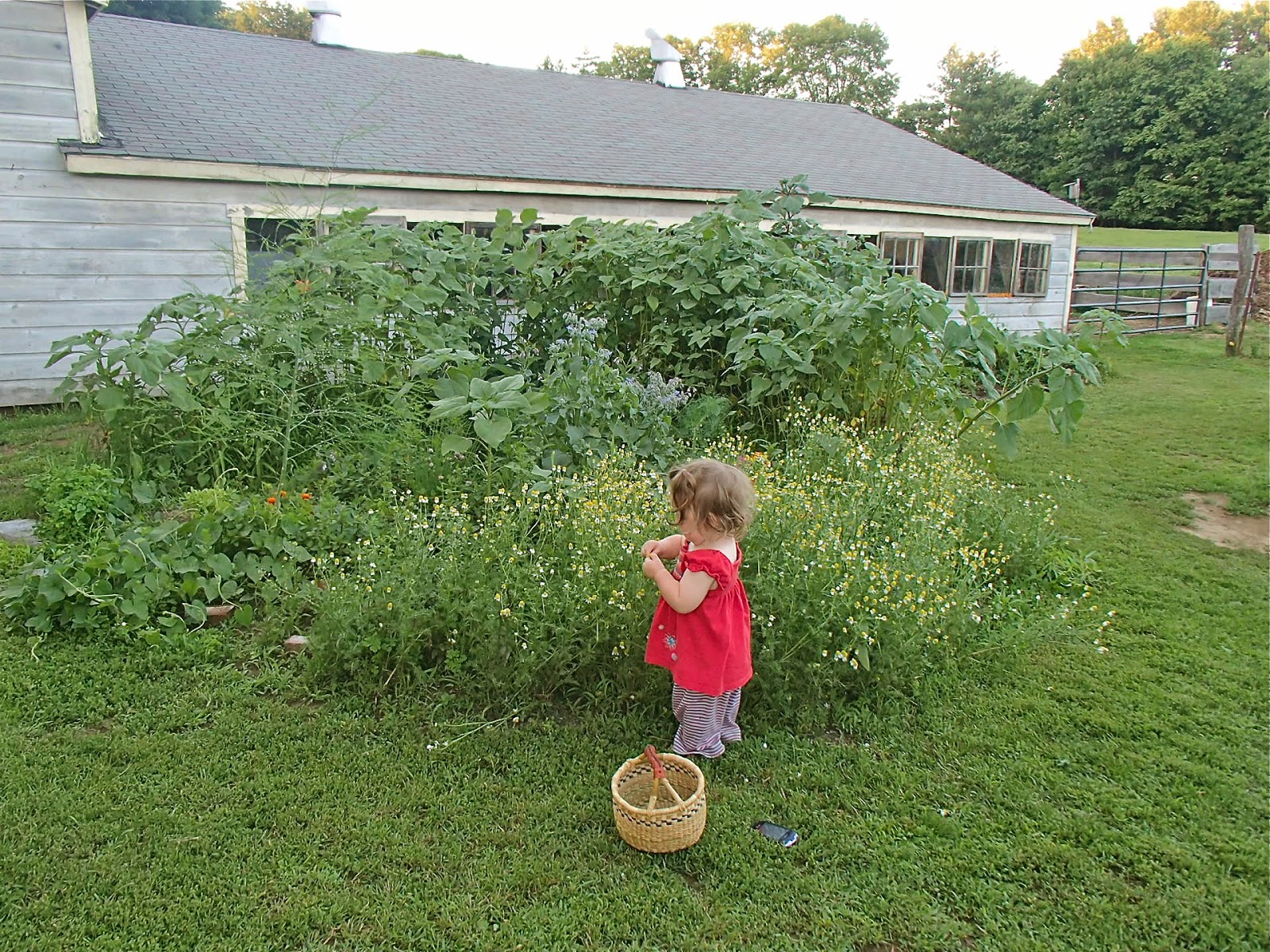 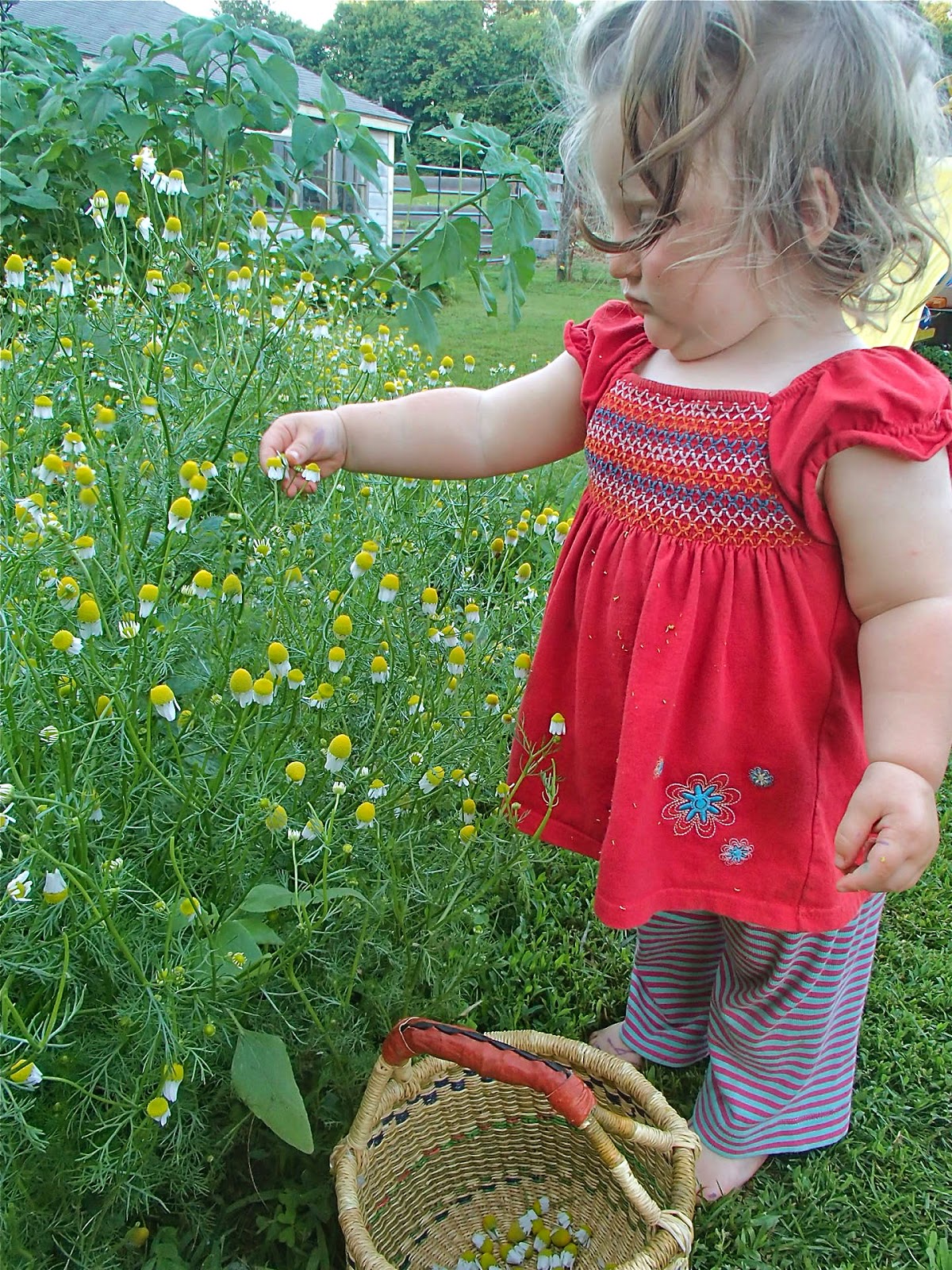 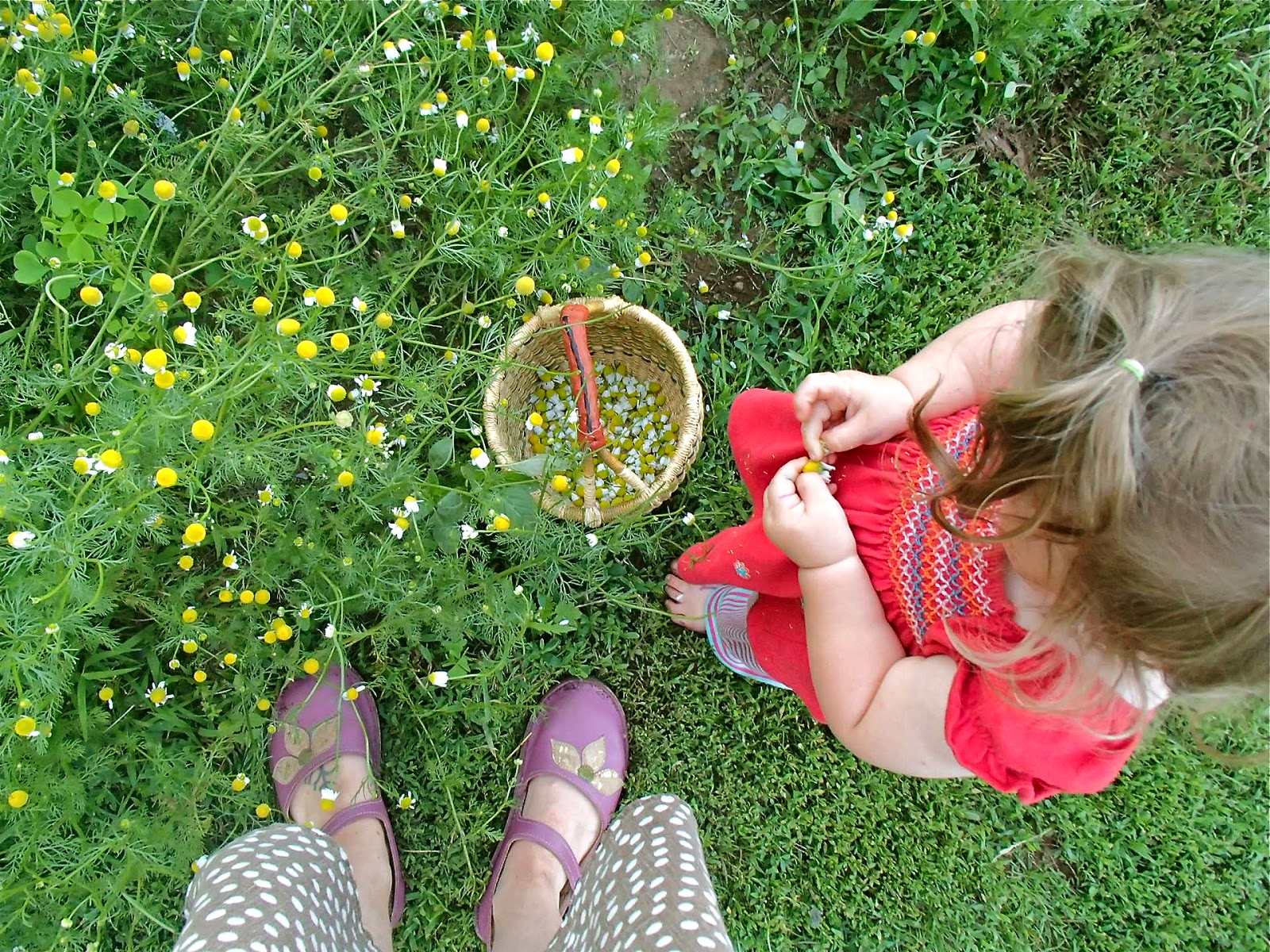 We are so fortunate to have our tall stand of maples on the west side of our property.
By early evening, the herb garden, swingset, blueberry bushes and firepit are in shade.
I enjoy going out to the herb garden and weeding or harvesting herbs at dusk.
Fenna helped me gather chamomile tonight.
Posted by Old Gates Farm at 10:03 PM 3 comments:


Ever since we dragged an old hay rake out of our woods several years ago, Kaylo has wanted to use one of the wheels for an herb garden.  The hay rake ended up as scrap metal, but we kept both wheels for him to use.  This harsh winter killed most of my herbs, with the exceptions being chives and comfrey.  It seemed like a great year to start over with the garden.
We wheeled it over (those old metal wheels are heavy!) and he laid the bricks and transplanted the chives and the volunteer chamomile sprouts (which tend to be some of the first sprouts every spring).
When we bought our tomato and pepper plants, we picked up some more thyme, oregano, marjoram, sage, and a new one for us--cumin!  He also chose a few flowers to plant around the wheel.
We have a lot of volunteer plants in this garden--mint spreads throughout it, cilantro, dill and chamomile are popping up everywhere, but the main one is sunflowers.  So.Many.Sunflowers.
I used to hate to pull them.  I didn't have the heart to do it.  But by late July, the garden was completely covered by sunflowers.
For the past couple of years, I transplant them as many places as I can and give them to neighbors and friends.  We have more than ever this year, so I have given up a large area of my garden to them.  Don't get me wrong--I love sunflowers...I'm just running out of places to put them all!
Posted by Old Gates Farm at 10:09 AM 1 comment: 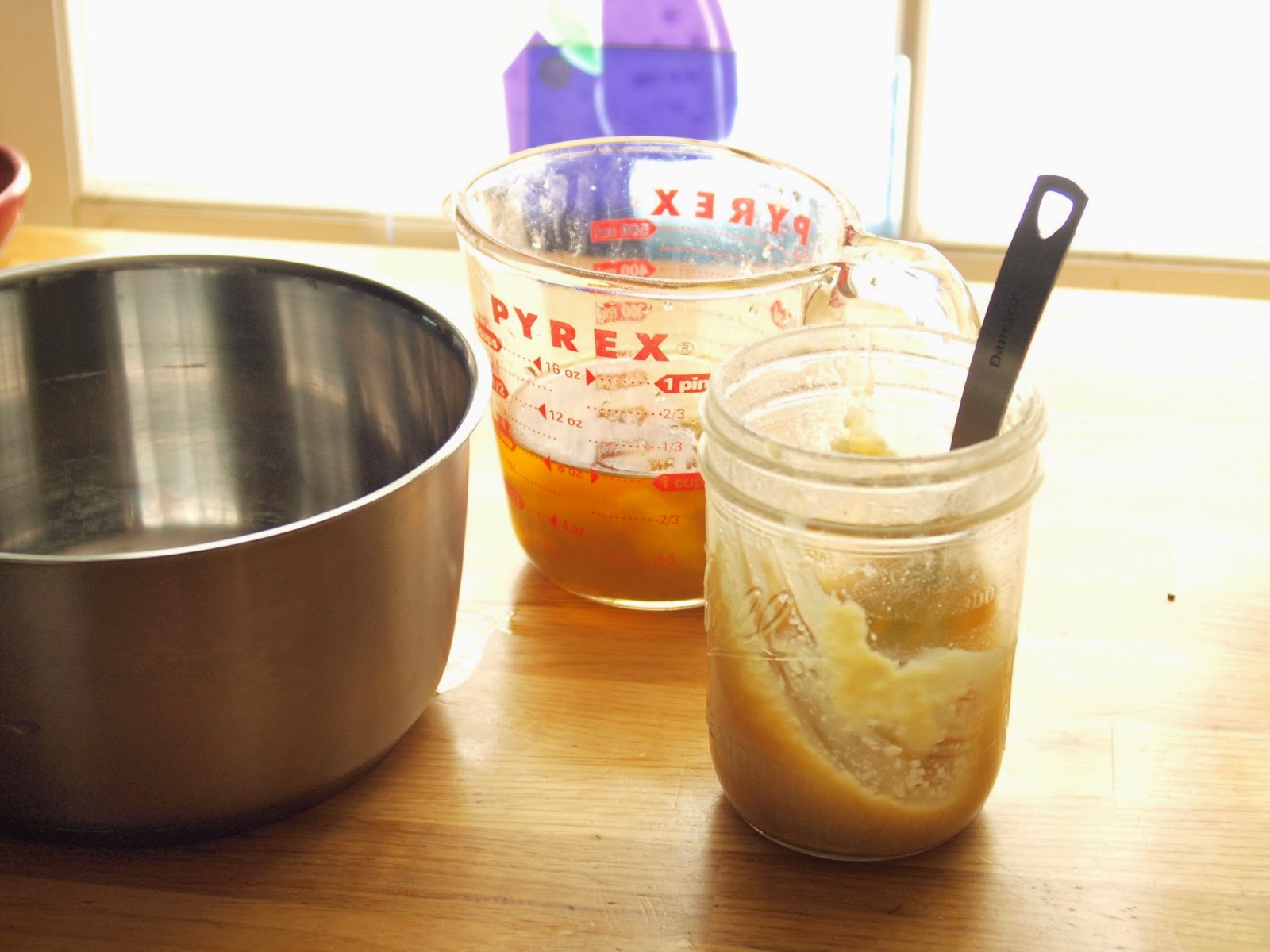 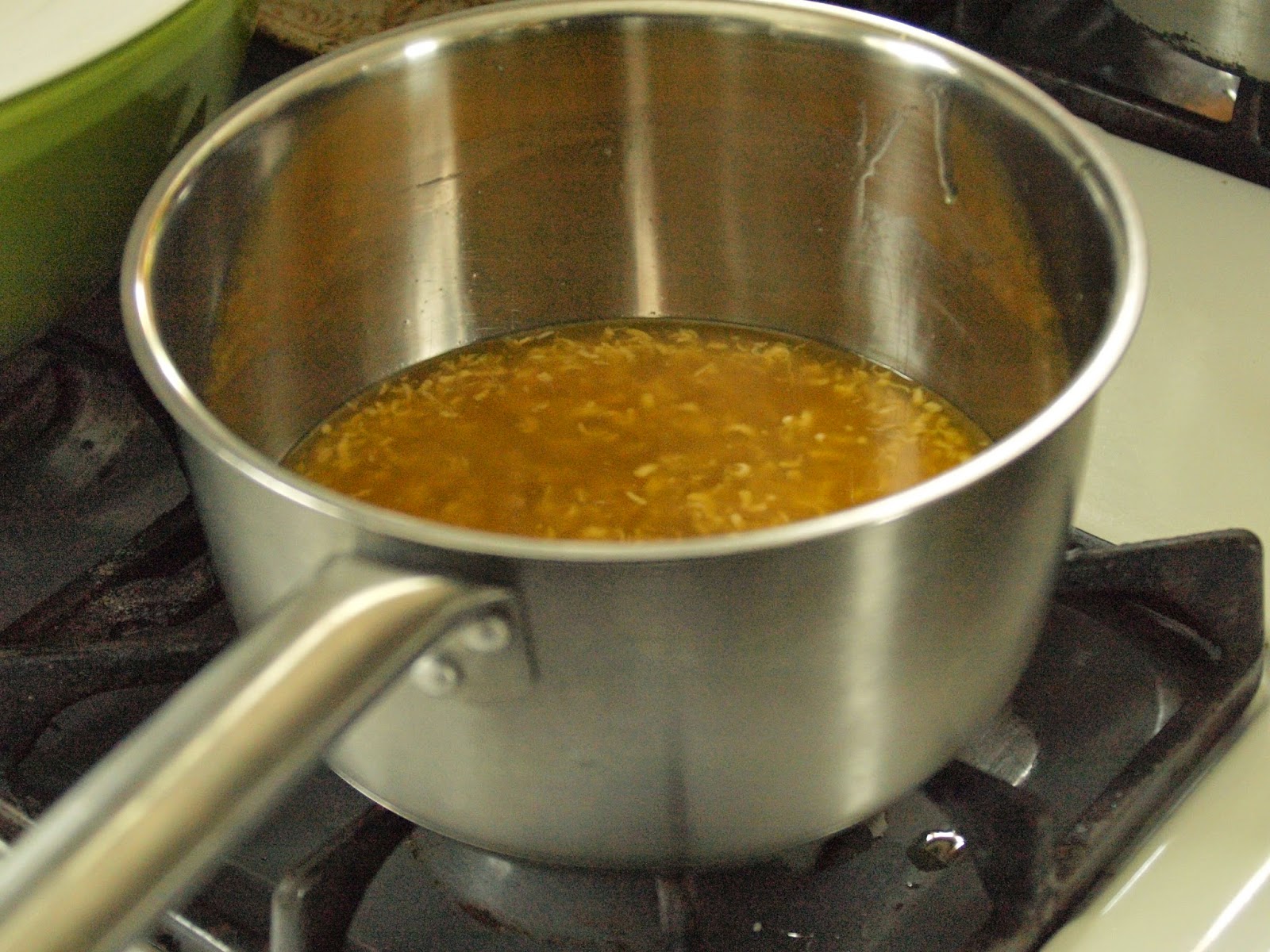 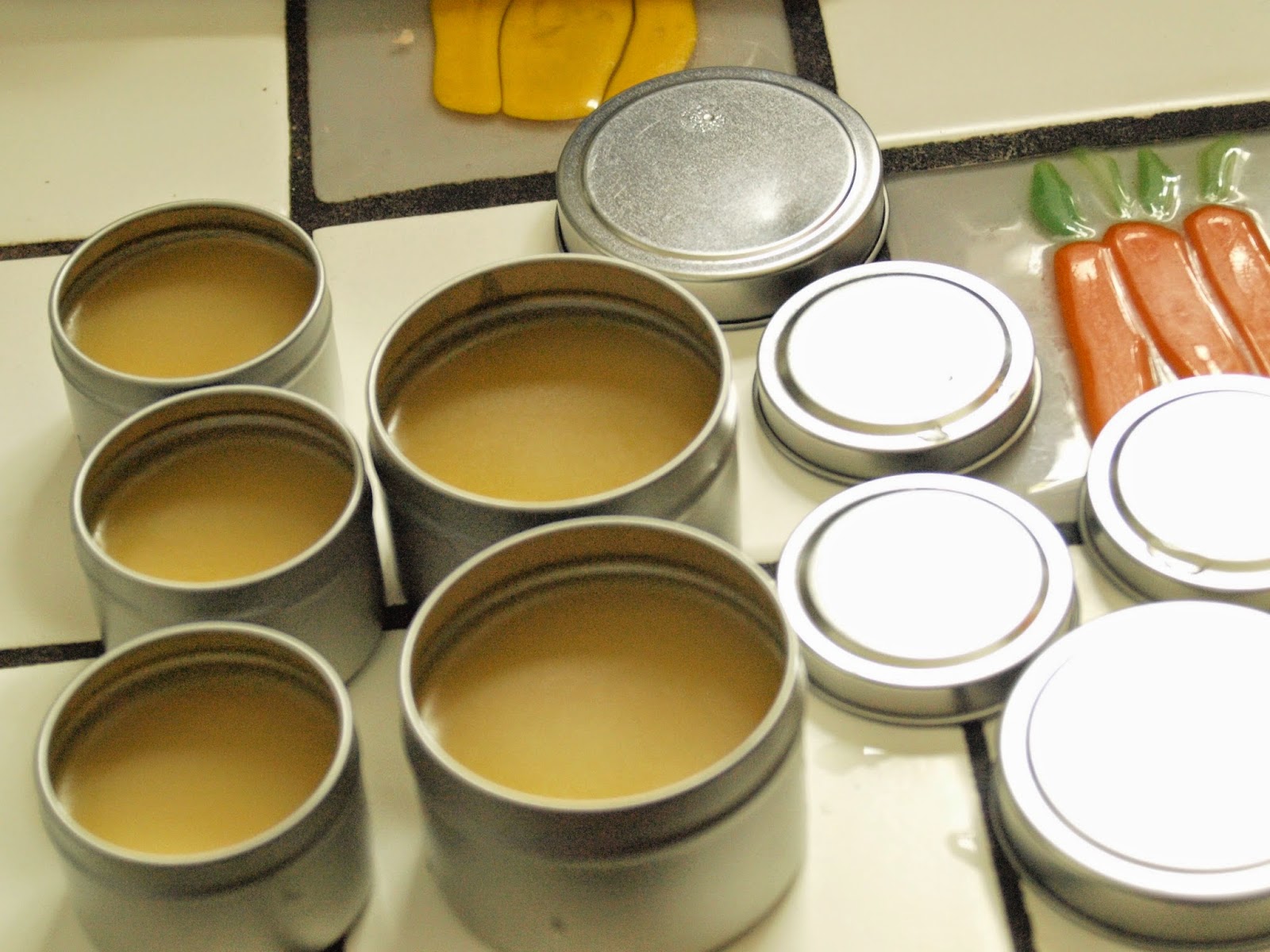 I thought I had posted a photo of some herbs that I had infusing in organic olive oil... But I can't find it.
Anyway, about 7 weeks ago, I put a jar of herbs and olive oil in the window sill (chamomile, yarrow, comfrey) and shook it every few days.
Some of my kids have dry skin and rashes during the winter and neem oil seems to work well on it.
So I strained the olive oil, added cold-pressed neem oil and beeswax (I eyeball it, but about 1 part beeswax to 3 parts oil) and heat just until the beeswax is melted.
Even with lavender essential oil, you can still smell the neem oil a lot...but it works so well that we don't mind the smell.  ;)
Posted by Old Gates Farm at 12:11 PM 1 comment: 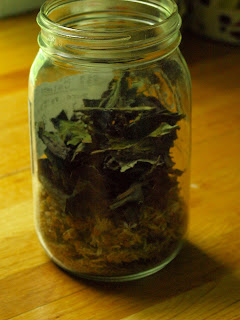 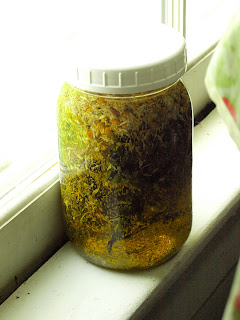 homegrown comfrey, chamomile and yarrow
infusing in the window

in the herb garden 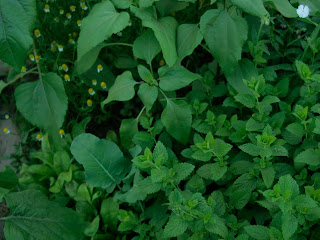 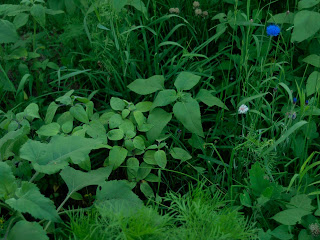 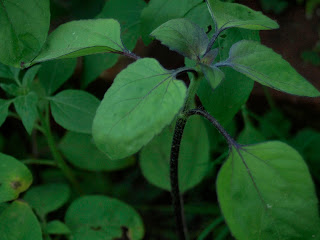 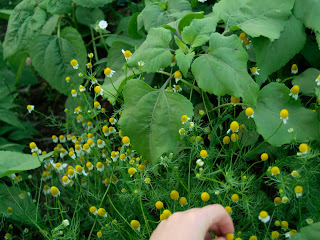 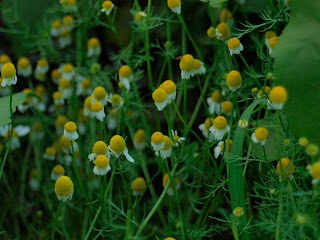 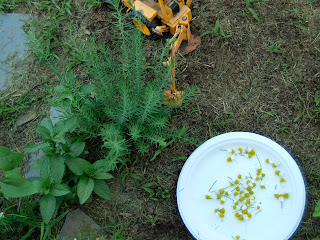 The herbs and flowers are growing so fast with the rain and heat we've been getting.
Lemonbalm and calendula,
and oh so many sunflowers.
I try and collect all of the volunteer sunflowers and move them to designated spots in the spring.
But as you can see, there are sunflowers in almost every picture.
I'm excited for the ones with the purple stems...those I planted from seed this spring.
And chamomile.  We love chamomile.
There is nothing like homegrown chamomile tea on a cold winter night.
Posted by Old Gates Farm at 8:31 AM 2 comments:

and the following places: 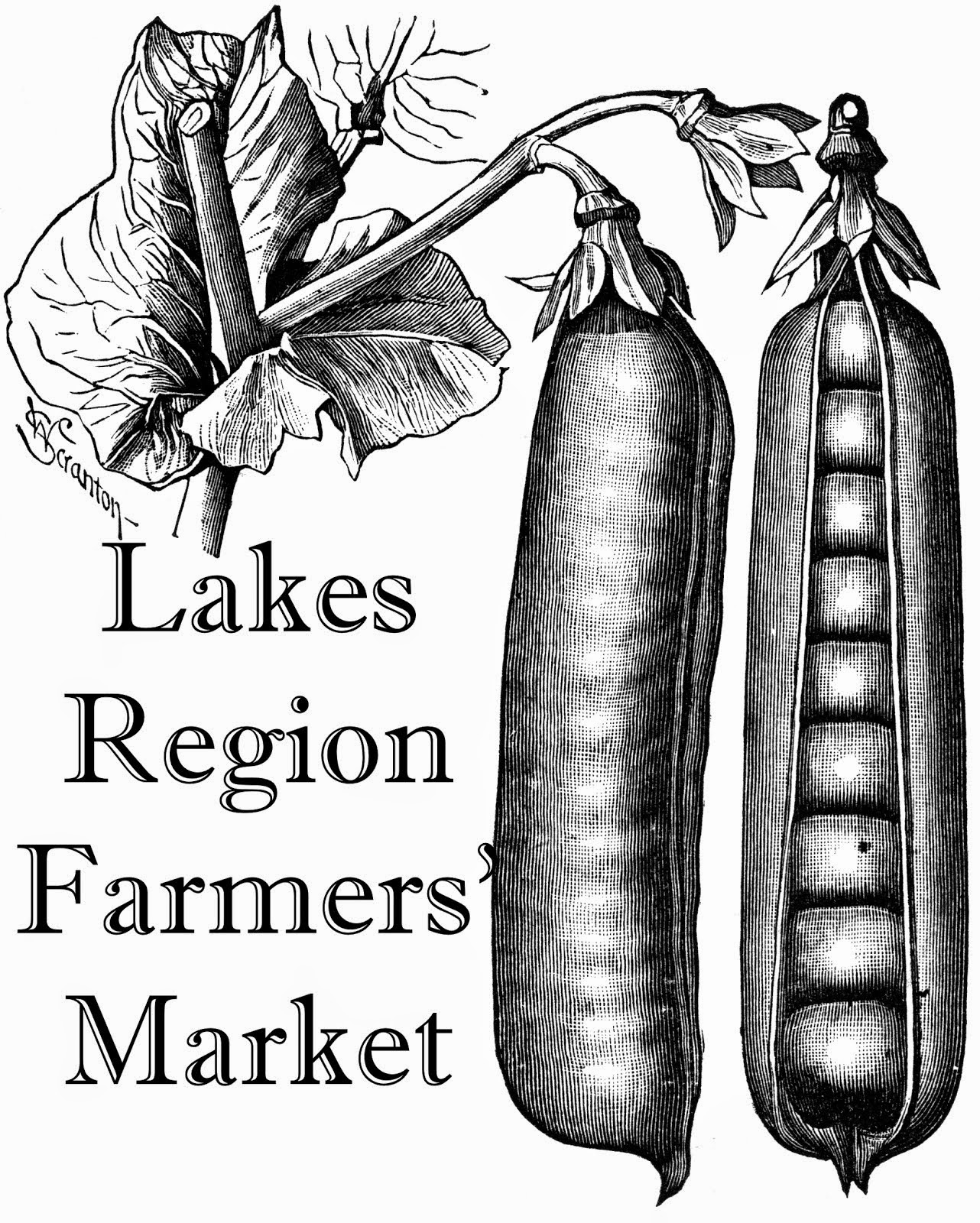 Some of our friends: 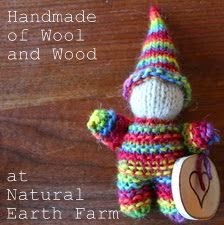 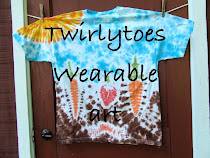 We are a 13 acre farmstead in the Taconic Mountains of Vermont, known locally as the old "Gates Farm" where a family of 7 started the journey of growing our own food more than 15 years ago. Over the years we've added acres, animals and babies to the mix and are blessed to be able to share our vegetables, meats and milk with the community.
~~~~~~~~~~~~~~~
*He* grew up, not on a farm, but loving all things farming in a small rural community in Connecticut. He spent many years working on farms before transferring up to a college in Vermont to study organic agriculture.
*She* grew up far from farming on the shores of Lake Michigan, but after a summer spent out east on the Appalachian Trail, fell in love with Vermont and moved out to spend her last two years of college studying organic agriculture.
They met working on a small farm at the college and set off to try and live simply, care-taking a small farmstead that would eventually become their own little farm.
15 years, 5 kids and many homestead-y twists and turns later... here we are.

© old gates farm 2011-2019
No photos or other content on this blog may be used in any way or place without written permission. Thanks!